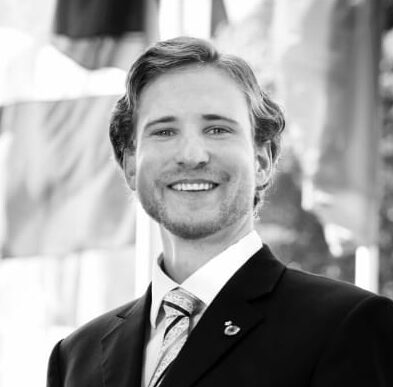 His commitment and follow up reflects his professional work ethics. This allowed him to be one of the most promising leaders of the younger generation and was officially elected in 2017 as the youngest president of a complex global public affairs office.

As president of the global office of THE GLOBAL UNION & GU-GHCF & Permanent Mission to the global Safety of Nations and their People (a global supranational-intergovernmental organization-authority, its permanent mission and its igov. foundation), H.E. S. Fabrice Houmard, a committed young entrepreneur, political connected, has been involved with his business partners in various start-ups and projects and has served on various boards.

As an honor of his acceptance of his official election as President of the global Office, one of his family names, was included in the name of the GU’s international-intergovernmental non-profit foundation – GU’s GLOBAL HOUMARD & CO. FOUNDATION.

He positions himself geopolitically and his travels enriched him culturally through the diverse network he established in both the public and corporate sectors. This has empowered him to play a pivotal role in ensuring that his team represents a diversified cultural background which is both inspiring and a source of enrichment for the GLOBAL UNION & GU-GHCF it’s Permanent Mission Boards, Parliament, Committee, Councils and the population – for you, with you, for all as only together is better. He believes that we rise by lifting others. This allows him to neutrally assess and handle national and global challenges, as well as develop preventive and innovative solutions for the benefit of humanity – to protect, save, rescue and empower lives around the globe!

He is a member of different boards and councils, such as Care Team of Airlines (Star Alliance Member) and Institutions of neutral supervisory Board Members, such as H.H. Jawaher Bint Khalifa Al Khalifa Youth Empowerment Foundation & Innovation Center and newly (2020) Member of the Advisory Board of the Abrahamic Business Circle (due to the Peace-Agreements between the UAE, Bahrain, USA and Israel). He is a former Member (with his first start-up) of the RJC (Responsible Jewellry Council) and former Deputy of the ICDO (International Civil Defence Organisation).